ABOUT THE JEFFERSON PARKWAY

As metro Denver prepares for the future and as demands on current roadways increase, additional mobility options will be critical to moving people and goods while creating safe, efficient and quality transportation experiences. The Jefferson Parkway is a privately-funded, publicly-owned regional toll road that has been planned for decades and will begin construction in 2020, improving regional connectivity and providing choice and convenience to residents, commuters and travelers in greater metro Denver and northern Colorado. The roadway will provide enhanced regional mobility, taking traffic off of local roads while generating economic vitality for local communities. Grounded in long-term vision, the Parkway is an opportunity to bring new infrastructure to the region at no cost to taxpayers. 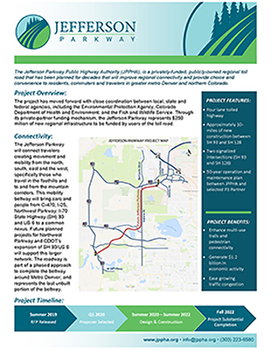 The Jefferson Parkway is a privately-funded, publicly-owned regional toll road that has been planned for five decades and will begin construction in 2020, improving regional connectivity and providing choice and convenience to residents, commuters and travelers in greater metro Denver and northern Colorado. In 2019, the Jefferson Parkway public highway authority will be undertaking the procurement process to identify a concessionaire to design, construct and operate the parkway.

Why is the Jefferson Parkway being built?

As metro Denver prepares for the future and as demands on current roadways increase, additional mobility options will be critical to moving people and goods while providing safe, efficient and quality transportation experiences. The Jefferson Parkway will support enhanced regional mobility, taking traffic off of local roads while generating economic vitality and choices for local communities.

Combined with planned/future improvements by the Colorado Department of Transportation (CDOT), the City of Arvada, Northwest Parkway and the City and County of Broomfield, the Jefferson Parkway will contribute to a cohesive, integrated regional transportation network incorporated into long-term planning efforts.

When was the Jefferson Parkway first proposed?

Dating back to the late 1960s, Congress authorized the first studies for a highway system to encircle metro Denver, providing improved regional and long-haul connections between I-25 and I-70. Since then, roadways such as C-470, E-470 and Northwest Parkway have been built to support this vision.

In 2008, CDOT released the Transportation and Environmental Planning Study (TEPS) with 73 different alternatives evaluated to connect the Northwest Parkway in Broomfield to the C-470 terminus in Golden. The study’s preferred alternative is a combination of projects including 10-miles of improvements to existing roads such as SH 93/US 6 and Interlocken Boulevard, and approximately 10-miles of new construction. In the absence of federal or state funds to build the roadway, the Jefferson Parkway Public Highway Authority (JPPHA) was created in 2008 with the mission to finish the 10-miles of new construction to be the Jefferson Parkway. With this in mind, the alignment of the Jefferson Parkway has been set for more than a decade. Residential communities and retail developments like Leyden Rock, Candelas and the Candelas Marketplace have all been built around the Jefferson Parkway alignment and the dedicated right of way.

After years of evaluation and collaboration, Jefferson County, the City of Arvada and the City and County of Broomfield share a collective vision and are dedicated to the completion of the Jefferson Parkway.

Will the Authority be acquiring land to build the Parkway?

No, the Jefferson Parkway Public Highway Authority owns the right of way needed for the tollway.

How is the Jefferson Parkway being funded?

During a time when CDOT is facing extreme funding challenges, the Jefferson Parkway will bring $250 million in new infrastructure to the region through private funding while maintaining public ownership over the tollway. This approach means that Jefferson County, the City of Arvada, and the City and County of Broomfield are providing the start-up funds needed to initiate permitting prior to construction. The selected concessionaire will pay back each jurisdiction their investment, plus interest, once the Parkway is operating.

Is it safe to construct the Parkway next to the Rocky Flats National Wildlife Refuge?

What efforts will be taken to mitigate construction impacts? Will there be ongoing environmental monitoring during construction?

The Jefferson Parkway Public Highway Authority understands the neighboring community’s concerns about safety. The Jefferson Parkway Public Highway Authority is committed to working with the EPA, DOE, and CDPHE to ensure that monitoring during construction of the area meets all state and federal compliance standards. The selected concessionaire will be required to adhere to all protocols regarding environmental compliance, air quality, dust mitigation and stormwater management set forth by the regulatory agencies.

The Authority is creating more stringent standards which the concessionaire’s construction team must follow that go beyond government and agency requirements. In addition to these requirements the JPPHA is also establishing baseline conditions by resampling soils in advance of construction to ensure and validate previous studies that the right of way adjacent to the Rocky Flats National Wildlife Refuge is safe for unlimited use.

When will construction start and how long will it last?

Construction is tentatively scheduled to begin in 2020 with estimated completion in 2022.

How will the Parkway impact traffic on local and arterial streets?

The Parkway will ease growing traffic congestion on arterial streets like Indiana, Wadsworth Boulevard, SH 93 and more. Commuters, vehicles destined for the mountains, and other regional travelers will now have the option to use the Parkway instead of roadways which serve the surrounding community. The ultimate design for how the Parkway connects to these streets will be identified through the procurement process.

How will the Parkway benefit local communities?

The development of the Parkway presents opportunities to:

Who owns the Parkway? Who will be responsible for ongoing operations and maintenance?

The Jefferson Parkway Advisory Committee (JPAC), a group composed of area community stakeholders, provided feedback on community priorities and preferences that informed the project’s Request for Proposals (RFP), which potential concessionaires will use to develop their proposals. A Local Working Group will be created similar to the JPAC that will serve as a focus group during the procurement process.

How will the concessionaire and final design be identified?

Three internationally-recognized concessionaire teams have been selected to respond to the RFP following significant industry interest in the project. The concessionaire will be selected in early 2020.

The final design for the Parkway will be developed by integrating the best ideas from RFP respondents and conversations with the community.

How can I stay engaged and updated on the project?

The latest updates will be posted to the project website, www.jppha.org.